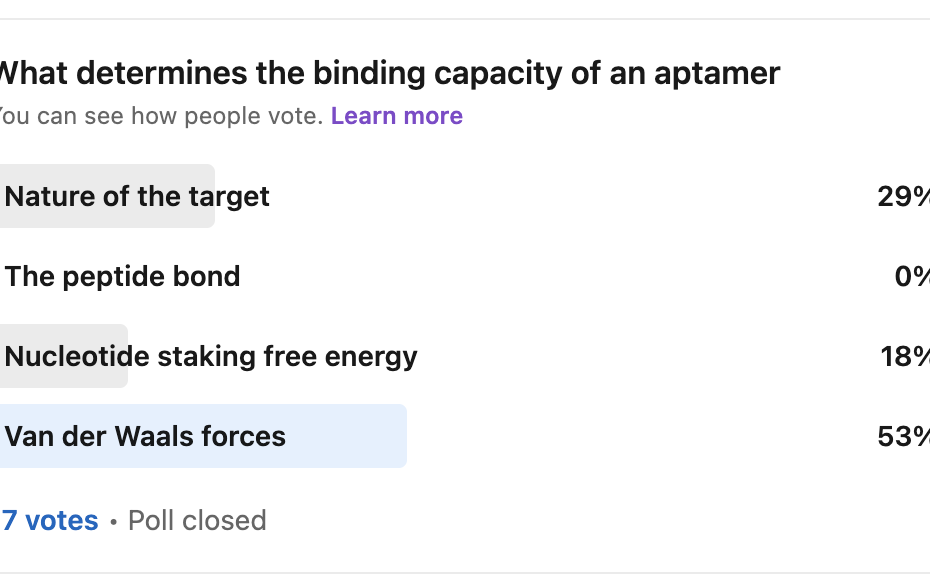 What Determines the Binding Capacity of an Aptamer?

What determines the binding capacity of an aptamer? Our poll results indicate that………

Let’s go through the options one by one to determine the correct answer.

b) The Peptide Bond.

It is good to see that there are no votes for this one.

Although aptamers are single stranded molecules the lowest free energy state for this molecule is as a double stranded form. In consecutive paired bases (double stranded DNA) there is a need for the base pairs to stack on top of each other. Aptamers will form stems and hairpins with varying degrees of stability. One driver for the binding strength of an aptamer is the binding of the target improving stacking energies and stabilizing secondary structure. I suspect that this is the primary force between target and aptamer binding in most cases.

To understanding how Van der Waals forces interact with aptamer binding, we need to separate them as two kinds: those involved with the attraction between stacked bases as the aptamer forms tertiary structure with itself, and those involved with the binding to the target. As we explained above, internal Van der Waals forces will also contribute to more favourable free energy as well as charge interactions between the target and the aptamer.

So what determines binding capacity of an aptamer? The nature of the target is fundamental. If you have a small molecule as a target, there are implicitly fewer available forces for interactions with the aptamer thus resulting in lower binding affinities. Binding affinity is as much if not more a function of the target’s capacity to enter into charge interactions as it is the aptamer’s.